The Paycheck Protection Program (the “PPP”) has provided some $660 billion in loans to businesses to fund payroll and other expenses. We have reviewed aspects of the PPP in several prior articles including HERE and HERE.

One of the most enticing elements of the PPP is that while the funds are disbursed as a loan at very favorable terms (2-year term, no payments for six months and a 1 percent interest rate; interest does accrue during the six-month payment deferral period), the loans can be forgiven. If forgiven, what was a loan becomes essentially a grant. So, if your business received a PPP loan, or you are in the process of receiving a loan, start planning now for applying for forgiveness.

Before getting to the details of what is required for a PPP loan to be forgiven, let’s cut to the chase. The guidelines for forgiveness are not as clear as we might like. You should start planning now to document your use of the PPP loan funds so that you can make the case that your loan should be forgiven. You should now be talking with your internal staff and your external advisors about maintaining necessary records. And you should be talking with your lender about what they will be looking for in the way of documentation.

The bank or other financial institution that made the PPP loan to your company will be deciding if the requirements for forgiveness have been satisfied. Keep in mind that, as of today, no lender has ever forgiven a PPP loan; the first applications for forgiveness will not be submitted until at least eight-weeks after the first PPP loans were disbursed. Now is a good time to call your lender and ask what they will want to see. Likely your lender is still working on the checklist that they will employ, so it will not be surprising if you do not receive a comprehensive answer. Still, knowing more is better than knowing nothing, and your dialogue may help your lender later help you. The CARES Act, which created the PPP loan program, at section 1106(e) requires that a borrower submit to the lender an application for forgiveness setting forth:

So now let us turn our attention to making your application for forgiveness successful.

There are essentially three hurdles that must be satisfied in order for your PPP loan to be forgiven, namely:

In order to be forgiven, the PPP loan proceeds must be disbursed within eight weeks of receipt; this eight-week period is in the statute and the regulations refer to it as the “covered period.” Especially for those companies that received loans in the initial funding tranche, the clock is running. Funds that are not applied to permitted purposes (see below) within that eight-week period are not subject to being forgiven. This eight-week clock is going to have some curious effects. For example, your lease payments are due the first of the month. You received your PPP loan on the 17th. You may use your loan to pay for the lease obligation from the 17th thru the end of that month. Also, at the tail end of the eight-week period, which ends on the 16th, you can use the PPP funds to pay your lease through the 16th. You are going to need to calculate the appropriate pro-ration of your lease costs to be sure you are using PPP loan funds only for the obligations that exist during the eight-week period.

As is expanded upon below, most PPP loan proceeds, in order to be forgiven, need to be applied to payroll. You need to compare your eight-week calendar with your payroll calendar. No doubt they do not match-up. Assume your eight-week period runs out six days into a fifteen day pay period. Either your internal payroll function or your outside payroll provider should, as of the end of the six-day period, generate a report as to where the payroll obligations stands as of that day. You can utilize PPP funds for the payroll expenses of that period for that amount. There is of course a similar calculation to be run as of the day the PPP funds were received.

Yesterday, April 29, The American Institute of Certified Public Accountants (AICPA) requested that new guidance be issued to the effect that the eight-week period be deemed to begin consistent with the borrower’s pay period so as to avoid the need for stub-periods. Whether the SBA will revise the existing rule to adopt this request remains to be seen.

PPP loan proceeds, in order to be forgiven, may be applied only to certain purposes.
The FAQ published by the Small Business Administration (“SBA”) provides in part that PPP funds may be applied to:

From there, further guidance from the SBA requires that not less than 75 percent of the loan proceeds be applied to payroll costs and benefits, which makes it crucial to understand what are the permitted “payroll costs.” That same SBA FAQ provides the payroll costs include:

Note, however, that PPP funds cannot be used for either (i) the Emergency Paid Sick Leave Act (“EPSLA”), which entitles workers to up to 80 hours of paid sick time when they are unable to work for certain reasons related to COVID-19, or (ii) the Emergency Family and Medical Leave Expansion Act (“Expanded FMLA”), both under the Families First Coronavirus Response Act (the “FFCRA”); here is a review of those programs.

If you have employees in either of those programs you need to be sure you account for that and exclude those funds from your PPP calculations. Also, while state and local taxes imposed upon the employer are permitted uses of PPP funds, the employer’s portion of federal tax obligations such as the FICA (Social Security) match are not within the permitted purposes.

Interest on mortgages may be paid with PPP loan funds, but not on the principal. And no, you cannot prepay mortgage interest.

Here are some practices you can employ now in order to demonstrate that your PPP loan funds were used for permitted purposes:

If, for whatever reason, you use PPP loan proceeds other than for a permitted purpose, you must repay that amount immediately. Those amounts will not be forgiven, and you may not repay them over the two-year term of the PPP note.

For companies without stable employment levels, this requirement may be an issue. That said, all employers need to be aware of it as it appears that there is a drafting error in the statute.

In submitting your PPP application, you provided information as to your payroll either based upon 2019 figures (likely you took this approach if your business is seasonal) or for 12-months ending in 2020. Keep in mind the full name of the PPP, the Paycheck Protection Program. Its goal is to maintain payroll, and your ability to have your PPP loan forgiven is dependent in part on maintaining the payroll that was certified in your loan application. This expectation is accounted for under two rules set forth in CARES Act §§ 1106(d)(2) and 1106(d)(3).

First, the amount of your PPP loan that may be forgiven is limited to the extent you have a reduction in the number of full-time equivalent employees (“FTEE”). The loan forgiveness limit is a fraction in which the numerator is the average FTEE over the eight-week covered period. The denominator is:

Seasonal employers are required to use (a); other employers may use (a) or (b) and presumably will use the smaller of the two. That fraction will be applied to the amount of the PPP loan (and not just the portion applied to payroll expenses) in determining a cap on the amount that may be forgiven.

If you have laid-off or terminated employees, you can make new hires (they do not have to be the former employees) to bring your FTEE census back to where it was.

Second, if you have employees who were making less than $100,000 on an annual basis in 2019, and they took a pay cut in the eight-week “covered period” of more than 25 percent, then the amount that can be forgiven will be reduced, apparently on a dollar-for-dollar basis. For example, if an employee was making $22 per hour, and is reduced to $15 per hour, the reduction in compensation exceeds 25 percent. Under the current interpretation, the loan forgiveness will be reduced by $1.50 per hour (i.e., the reduction in compensation exceeding the 25 percent cap) worked by that employee. Exactly how it will be reduced is not yet clear; new guidance from the SBA has been promised. But you need to be aware of that risk and should consider rescinding any reductions in compensation for the eight-week period. At the same time, if employees making more than $100,000 in 2019 have taken pay cuts, those reductions will not impact how much of your PPP loan may be forgiven.

HOW ABOUT AN EXAMPLE

BUT THERE IS ALWAYS A GLITCH

Okay, that is how (it would seem) that it is to work. There would appear to be, however, a drafting error in the CARES Act as to employee compensation. Specifically, CARES Act § 1106(d)(3)(A) provides that:

The amount of loan forgiveness under this section shall be reduced by the amount of any reduction in total salary or wages of any employee described in subparagraph (B) during the covered period that is in excess of 25 percent of the total salary or wages of the employee during the most recent full quarter during which the employee was employed before the covered period.

If and when further guidance as to PPP loan forgiveness is published, we will supplement this review.
Other Open Issues

DEDUCTIBILITY OF EXPENSES PAID FOR WITH FORGIVEN PPP LOAN PROCEEDS*

Another question that is pending is the degree to which expenses funded with a forgiven PPP loan may be deducted from taxable income. All else being equal, payments toward payroll or mortgage interest are deductible in determining taxable income. But if you receive a PPP loan, and the loan is forgiven, you have received a non-taxable grant. Can you both receive those PPP funds and then take a tax deduction for the amounts paid out? Tax professionals are debating the question, and the question has been presented to the Treasury Department.

*Update: In an April 30 article reviewing the mechanism by which a Paycheck Protection Program loan may be forgiven, a pair of open tax questions with respect to PPP loans were reviewed. One of them dealt with the question of whether expenses funded with a forgiven PPP loan may be deducted from a borrower’s taxes. Well, the ink was barely dry on that before the IRS addressed the question. In a notice published April 30, the IRS announced (IRS announcement was 2020–32) that expenses that are funded with a forgiven PPP loan may not be deducted from the borrower’s income. In effect, while for example compensation payments may be paid for with a PPP loan, and the borrower does not recognize income in the amount of those loan proceeds, the borrower may not also take a deduction in that same amount. Such is the rate of change with PPP loans. 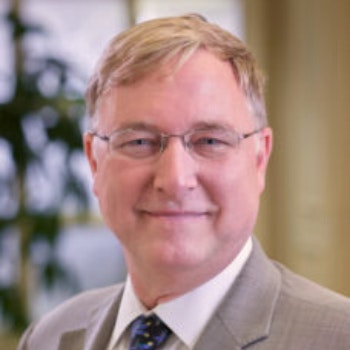 Tom is a Member in Stoll Keenon Ogden’s Louisville office and has been with the firm for nearly 30 years.